From my front veranda March 2018

When I was a child my dad shovelled the snow. We never had eaves trough problems, freezing ice on the ground (except for the skating rink my dad made in the backyard). Perhaps a few icicles. But that was the extent of our winter weather. No worries and none of the rigamarole I have to go through with when it snows more than a few centimetres. I’ve had to get heat cables on the roof and into and outside the downspouts tand downspout extensions  – the latter several revisions by  my handyman until something (hopefully) worked. He also had to extend the downspouts on both ends in the backyard way out, placing them on top of bins. So getting onto the patio, etc. is a winding exercise. Plus I have to calculate when to turn on the heat cables, and roof and downspouts ones can’t be on at the same time or it will shut that circuit off. I’m forever looking up a tthe roof to see the level of snow still there, salting parts of the driveway, veranda, etc. The list is endless and so is my time wasted. I do have someone hired to shovel the snow. All this costs money, my money. No wonder as the month gets closer to the end, I have, as they say, more month than moneyals

It it isn’t house-related, it is health-related that steals my money.

So, while the above photo may look bleak except for the sky, I prefer the dry no snow on the ground to snow. It has been dry on the ground in Toronto for a few weeks. Sure there have been traces of rain and a few snow flakes, but they are not staying on the ground. So it looks dismal, but hey, not snow or ice – at this point.

Spring arrived today (12.15 p.m. noon with the Equinox) according to the calendar. The meteorologists’ predictions call for more snow and rain  as we get into April. Some rain I can handle (as long as it doesn’t get into my house. The gardens need the rain. And I need my gardens  0utside – soon.

Meantime, I’ve finally planned my outdoor garden, sent in my seed order to the seed catalogue company, bought a few heirloom seeds at a garden show (indoors) at the Toronto Botainical Gardens last month, attended Canada Blooms, and in the food department bave some basil varieties just starting to grow in a sunny window, am growing potato plant indoors (I get a few potatoes, albeit small), and one of the three rosemary plants I brought in last fall  is still doing well (so far). Plus tending my other indoor plants such as coleus, palm, various Spring cactus and the one begonia that has survived (so far) being brought indoors last fall. Some of these latter two are starting to bloom.

And I’m taking photographs of the dead gardens, live ones indoors (like at Canada Blooms) and looking at last year’s garden photos. Here’s one below.

How do you survive winter?

Only Child lives in survival mode 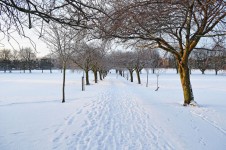 Winter – will it ever end?

I am tired beyond the proverbial eyeballs with living in survival mode. This has been going on for several months and it is eating into my writing time and well, any time to enjoy life. Not to mention the financial problems it is causing.

Last week’s post covered all these issues. The insurance one has been resolved and the ice jam in the eavestrough and one downspout area as well – for now. Didn’t need insulation. The cause? The awful winter (and whatever/whoever causes that). Lots of people are getting ice jams on the side of the roof where the sun shines – apparently caused when it’s cold and the sun shines there from the west (afternoon sun) as my handyman Mike found out from asking around. One of the roofers he spoke to had it happen at his house and he had his attic insulated to the max.

Not everyone is getting the added “blessing” of icicles forming on the outside of the downspout when it is cold and water dripping from the downspout joins when the temperature (plus sun shining) goes up a bit in the day. So, the water drips on the patio and when it freezes overnight – well you can imagine. That is also the corner where I have my rain barrel for summer use. Late fall I had shut off the downspout going to it and that part seemed to be working. So I’ve been busy trying to stop the ice and drips to no avail. Enter my handyman who had to remove the lower downspouts and one of the connections to the rain barrel and put in a very long extended “downspout” (sidespout?) out to the lawn where water can drip out. He also blow-torched the downspouts that remained, put roof melt pellets on the eavestroughs and cleared out the dangling icicles and the ice on the patio (salt in the area plus hacking the ice with my garden shovel).

Mike said he found no obstacles (leaves and branches) blocking the eavestroughs or downspouts. I told him the guy that cleans does a thorough job – three times because of the trees on the other side where there is no ice problem.

“You do what needs doing and then you get screwed,” was how I put it to Mike.

And all this begot unexpected financial hardship. Luckily my ex-husband sent me an e-transfer for part of the work. My April and May financial situation is very bad – property taxes just started up and then there are income taxes and a huge water bill in April. I will also need to get a new rain barrel (plus get a few other outside repairs not connected to the eavestroughs ice jam) done in the spring.

Gee, maybe it is good that spring will again be late and gradual this year – it will take April and May for it to become real spring weather, according to the weather network. Although I am fed up with all the excess snow shovelling and dealing with the city to get their d*** snow plough contractors to stop dumping the snow at the end of my driveway. Not to mention keeping downstairs taps dripping and insulating drains with newspapers to try to prevent frozen broken pipes when the temperature dips way way down.

I wonder how much damage to property and gardens God will have happen during March, April and May? We have snow falling down now and the weather forecast includes ice pellets and maybe some freezing rain in parts of Southern Ontario.

Remember I don’t believe in Mother Nature – no such person.

On a lighter note. Did anyone see (on the weather network, of course, my Bible) the video clip about Oklahoma US Senator James Inhofe who brought a huge snowball into the senate as a symbol that he doesn’t believe in global warming? Amen to him even though he got blasted for doing so. Watch it at http://www.theweathernetwork.com/news/articles/us-senator-fails-basic-science-tries-to-use-snowball-to-disprove-climate-change/46281/

And read some follow-up at http://www.scientificamerican.com/podcast/episode/climate-skeptic-senator-burned-after-snowball-stunt/

Only Child pines and whines for her garden

Tomorrow is the first day of spring – by the calendar. Most of Canada is still stuck in winter. Parts of British Columbia, particularly on Vancouver Island aren’t. Gardeners there have seen plants growing, been cutting the lawn and visiting garden centres for a month now. Here, in southern Ontario, Toronto specifically, a few plants were seen poking their heads out of the ground on Sunday. Last night (and overnight) more of that nasty winter stuff – snow-ice pellest- rain sloppy mix – what depending on where you live came down. So I was out at 11.30 p.m. last evening shovelling heavy snow it as it started to rain to try to avoid another session of water leaking in the basement.

I’m fed up beyond my eye teeth (and yes, I still have my own – so far) about all this winter crap. I want to get out in my garden and well, garden. When I was growing up, Mom, Dad and I were out there in April turning the soil and planting seeds. Not going to happen here this year at this rate.

Sunday, my friend Carol and I headed down to Canada’s largest garden show – Canada Blooms – for the annual early sniff and see of green, colour and GARDENS. Even with all that walking indoors, it still raised the spirits. And outside, at least it was sunny and dry, with most of the previous snowfalls’ aftermath melted. I bought two more houseplants – a spring cactus and another African violet.

Now we are back to square one. It’s supposed to be cold all this week. Next week more of this nasty mix of rain and snow – which as I previously posted we never used to get until the late 1990s.

At least we have daylight savings time with daytime lasting an hour longer and increasing in the evenings. When we hit late May sunset will be around 9.30 p.m. That’s my kind of season. You can guess what I’ll be doing outside most evenings then – maybe even after sunrise. My friend Tanya next door and I have been known to be out there pulling weeds in our gardens at dusk.

My Muskoka chair stares at me every time I go down the stairs to the basement. Soon, I’ll be able to get it back outside on the front veranda.

Meantime I’m pouring through the seed catalogue, getting my order, in well order. Now that I have received payment from an editing client (he wasn’t slow paying– it was two countries’ postal services – the US and Canada), I can actually buy the seeds. And growing extra coleus to bring outside (along with some other potted plants like the Rex begonias, rosemary, ornamental pepper and citronella) in late spring – if it ever arrives.

Anybody else anxious for the real spring to arrive? Or if you are in the southern hemisphere, do you dread the coming winter?