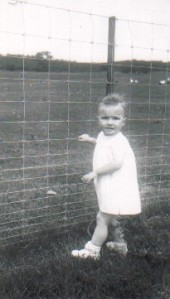 Me in 1950 – up against the barbed wire fence, a good analogy for all the consumer issues

The Ontario Energy Board may think so. Just read on.

I’m on another rampage about getting overcharged for services – this time it’s Toronto Hydro. Rates went up twice this year and although I know with another person in the house (the boarder), consumption goes up somewhat. But the amount seems a little high for just one more person, especially as both of us try to do energy-hogging jobs (like laundry and we wash with cold water and hang up a lot of our laundry) during the so-called cheapest off-peak time periods. And there are no new electrical appliances and the like in the house since February 2011. I don’t think a small dehumidifier counts as a big hydro user, especially as it hasn’t been used for a few months. And I also know I need some new energy-conservation windows but can’t afford them. But that’s been the situation since I moved here 15 years ago. Still the consumption has gone up – or so the latest bill says.

With the last bill two months ago (and it was up too) I tried to get Toronto Hydro – who is my municipal hydro utility – to send someone to come here and check my hydro electric meter to see if that was working okay. All I got from that was “it looks fine from here.” Excuse me, but when did call centre people become hydro tech experts?

I’m going after that end again –when I can find the time with all the other crap going on. In the meantime I’ve checked out other options online at Toronto Hydro – you can get your payments equalized to monthly coming out of your bank account. How that works for rate hikes and consumption which is never the same beats me. The other option is if you are low income (and depending on how many people in your household) you can get some financial assistance (this is Ontario Energy Board) – but it goes through a social service agency.

And that’s where that $26,793 comes in – according to Toronto Hydro, I suppose, as the information says “…in Toronto” a single person whose income is below $26,793 annually could qualify for this help. More specifics are at http://www.torontohydro.com/sites/electricsystem/corporateresponsibility/communityoutreach/pages/lowincome.aspx

So, my question is: Is the new poverty level for a single person living alone now $26,793? Last time I checked it was $19,000 (rounded off). And that’s before you pay taxes but after you take off deductions. With those criteria, I fall below the $19,000.

It’s a sad micro statement of the macro situation in the world today. The so-called middle class is fast disappearing – today you are either rich or poor. The Toronto Star is doing a series on Canadians Me, You, Us by Michael Valpy – and the current stories deal with just this.  Here’s a link to one such story http://www.thestar.com/news/atkinsonseries/2013/12/13/the_incredible_disappearing_middle_class.html

On a happier note – I got some justice from Rogers Cable TV – a voice-mail message from them notifying me the problem had been fixed and if there were any more problems to give them a call. Previously I had been informed that we customers aren’t told when a street problem is fixed and we just had to watch the TV to find out.

If you remember from my post last week I, a non-techie- had figured out what the cause was but it took a lot of shrieking phone calls to get someone to hear me.

Which makes me wonder what will happen with Toronto Hydro when I phone again (now a few months later) to get someone to check the hydro meter – in person, not remote.