Only Child on building and removing neighbourhood fences 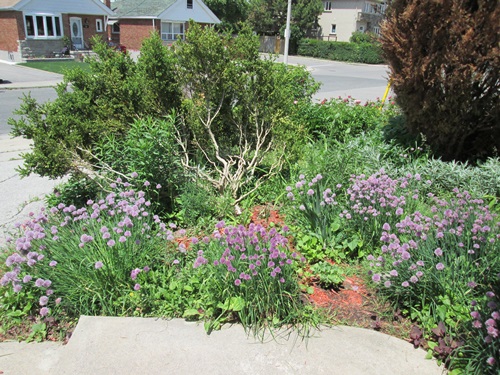 Front of my yard onto street this spring – no fences

Good fences make good neighbours. That old American proverb is playing out in my neighbourhood.

Across the street a lady who has lived there with her son for a couple of years and hasn’t exactly been friendly with the neighbours is having a big, big fence built. She does talk to her next door neighbours, my friends Carol and Al. Good thing because at least she consulted Carol and Al about this fence. Al is keeping an eye on it and talks to the guy putting up the fence. Carol showed me this huge fence dividing the backyards. The fence looks over 8 feet high, well over the requirements for a backyard with a swimming pool, which this backyard doesn’t have…yet. The fence is solid wood, not lattice and continues at the back of this neighbour’s driveway at the entrance to her backyard. If I understood Carol correctly, the fence is supposed to extend along their neighbour’s driveway right out to the street. That means it will be against Carol’s lawn, making it look ugly.

So far there has been no sign of this fence extension and the fencers haven’t been around for over a week. Fences around front lawns usually look awful. It makes me think the people are building walls to keep out everyone, as if to say – nobody allowed here except us who live here.

Lower fences, ranch style in front look okay and if you have a corner property, higher fences are a good idea. People like to run onto corner properties and throw garbage on them. But make the fences the steel chain line ones. That’s what most of the neighbours on the corners have built.

Contrast this with my neighbour behind my next door neighbour. Yesterday morning he was actively tearing down the old fence dividing his property and my next door neighbour’s. He was over in the next door neighbour’s backyard. As I picked the annual crop of black raspberries (yes it is that time of summer), I wondered if I should say something to him. But I didn’t’ just then. A bit later when I was sitting at my patio table and eating breakfast, he called me over. In his hand he held a bunch of invasive weeds which he had pulled. He started talking about that and we introduced ourselves. Gary has been there also two years and has been getting to know his neighbours since. He knew something about the neighbours behind me that I didn’t know. He offered to pull those weeds from my garden along the fence from my side – with my permission. I said I had done a big sweep pulling weeds before the raspberries came out, but give it a week or two and when the raspberries are finished he could do so. We also talked about the racoons who are taking over the neighbourhood and he said they even tore open a bag of bonemeal he had on his deck. I asked him if my next-door neighbours knew he was in their yard. He said, “yes” and the two of them were going to build the replacement fence together.

A fence made of wood lattice – with open spaces in it.

What a difference a neighbour makes.

Which neighbour would you rather have?

Filed under Friends, Gardening, Home and Garden, Only child, Raspberries, Sharon A. Crawford

Only Child finds solace in her garden 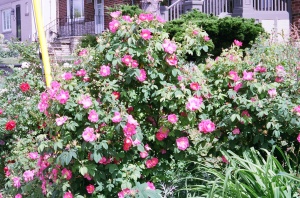 I’ve been seeking solace in my garden to get away from all the crap that has been shoved my way the last month or so. That is when one of these stressors – weather, i.e., heavy rain and winds – hasn’t gotten in the way. And the crap keeps piling up. Now the CRA messed up my tax returns on the notice of assessment and when I called they admitted their mistake and it will be fixed. Meantime, “the system”  won’t know this and so unless it is fixed before early July, the amount the Notice of Assessment says I still owe (but don’t) will come off my GST rebate for July and I won’t get my provincial tax credits (also July) until the situation is fixed. All for some clerical error at CRA. Not fair. I need that little extra to survive, or once the property tax and utility bills are paid, I do without somewhere (read health expenses for one).

My garden is my lifeline to comfort and some food. When I walk out into my garden and see they symmetry of the perennials, the shrubs, the raspberries starting to form, the onions and other vegetables coming up – even the ground where recent seeds were planted – I get some solace. The blend of colours – some white, red, yellow, blue, greens, silvers, and lots of shades of purple – the only spiritual nourishment in my life as I get no spiritual nourishment and help elsewhere such as traditional or non-traditional religion and faith. Faith and trust don’t seem to be in my vocabulary these days and it’s not by choice but from what’s been happening.

So I go out into my garden and absorb – sight, sound (birds), fragrance. I literally smell the roses which are now just beginning to bloom.

But there is a dark side to when I’m in the garden. Pulling weeds and digging are good ways to vent your anger and frustration. Each weed I dig up or yank out symbolizes the people, etc. who make my world worse. The pulled weeds are placed in the yard waste bins for city “garbage” collection to be dumped somewhere to go back to the earth. Appropriate. When we die our bodies disintegrate (if not done for us with cremation) back into the earth. A fit place for my stressors.

Sitting out in the garden in the sun or shade, reading a book, eating meals on the patio, or just taking in all the garden or collecting flowers are (along with writing) how I cling to sanity. Whatever sanity means these days.

Only child goes out into the garden

Only Child and her late Mom in the backyard garden. Mom is sitting in a Muskoka chair.

This morning before starting work I went out into the garden. I do this every day to relieve the stress before it gets to me. The plan was to transplant some basil, nasturtium and a coleus, and put the hose away because we are supposed to finally get some rain. Then I planned to sit out on the patio and eat breakfast.

Instead I stared at some of the many weeds and started yanking them. I know weeding is therapeutic (especially when you pretend the weeds are your problems and/or the problematic people in your life). However, weeding is turning into a routine almost every time I head out into the garden. This helps with decreasing the weed population – for now. But there is more to gardening than pulling weeds.

I am enjoying the lush early display of roses thanks to our early hot weather and snapped a few photos this morning. I do “tour” the garden (and snatch up weeds as I walk around) and I do sit out in the garden and actually do nothing but drink wine or water and read a book. And eat my meals out on the patio or on the veranda while sitting in my new Muskoka chair (a holdover from my childhood when that’s what you sat on in the backyard or on the veranda).  Maybe the weed yanking is also a family holdover. My mother was a gardener and she did a lot of weeding. She also grew beautiful rose bushes, including red roses climbing around an archway.

Still, I can’t help thinking that I need an attitude change here. I need to go into the garden to enjoy it – whether I am weeding or reading or planting or touring. This is my escape from the harsh realities of my life. Heck, most of the time I don’t even take the cordless phone outside. If anyone wants me they can leave a message – unless they are telemarketers – they can go, to put it politely, where the sun doesn’t shine.

And speaking of gardening and reading. A study at Wageningen University and Research Center, The Netherlands featuring people spending time in the garden and spending time reading shows that gardening relieves stress more than reading. I wonder if reading in the garden would relieve stress even more. Check out the study published in 2010 at http://hpq.sagepub.com/content/16/1/3.abstract

I did transplant the nasturtium and basil but left the hose lying in the driveway. We’ve had so many wrong forecasts of rain in the past two weeks. I’ll believe it’s raining today, when it actually rains.