Ice Storms Tornadoes Rain bring havoc to US and Canada 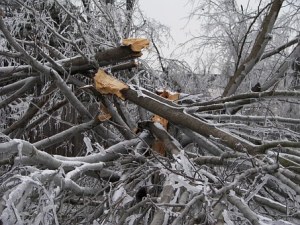 Wicked weather over the January 13 weekend and continuing this week if nothing else proves that we can no longer feel safe in our world – as if most of us didn’t already know that .It is heartbreaking and the icy conditions and tornadoes in the USA and now the ice storms, rainfalls and winds in Ontario from the same storm hit it home harder. So do the  torrential rains coming up to lower British Columbia. These and more (watch The Weather Network, especially the Force of Nature videos clips and that last word in the title is a misnomer and also Accuweather) should serve as a warning that we have to do something about this. Before we can even get -to climate change, first there are the current situations’ damage  that have to be taken care of.

Those last three words are important here. We need to go beyond hope and beyond prayer and get in there and help each other. If the power is out in your neighbourhood, make sure your neighbours are okay and help them  – if you have a generator and gas fireplace and/or gas stove, open your home to those that don’t. I keep thinking of the big southern Ontario ice storm of December 2013 and how my neighbours helped me and how my son, especially helped my then boarder and me by booking (and paying for) a hotel room for a few days in downtown Toronto where the power stayed on. My son, Martin, also took us out to dinner near the hotel, picked us up and drove us home for Christmas (we had the power back on then) and even brought Christmas dinner and helped cook it. Fortunately, I hadn’t opened the big freezer during the power outage, the freezer was full and except for the odd item in the fridge-top freezer and fridge that didn’t make it into my makeshift freezer – an old-fashioned milk shut-turned mailbox on an outside wall, food was okay.

Put salt on your driveway, sidewalks and verandah to melt the ice. As long as the temperature doesn’t go much below freezing it will soften the ice somewhat. Then get out there and move the ice with a sharp shovel. A garden digging shovel works fine. I know some of you with be tut-tutting the choice of salt, but in a situation like this people’s safety is the main thing. If you really want to get all environmentally proactive clearing the ice, use sand, but good luck finding any in winter.

I also have another problem to watch and with me it can happen without the torrential rainfalls in BC. I’m talking about basement flooding. Many properties in the area I live in have this problem due to the area being low level, with old sewers. The City of Toronto is working to remedy this situation but it will take years. See basement flooding program for more info on this.

My problem can happen no matter what the sewer infrastructure is because a contractor named  Nigel Applewaite who I hired to dig the side of the house with the wall cracks and to seal it, didn’t dig down far enough. He won ‘t do anything about it and has blamed it on the sewer drains. I had city workers check that out – twice. Drain was clear.

There was one other thing that developed that has something to do with it – the-eavestrough middle on the east side of the house got mis-shaped into a bow, no doubt from something in “nature” – i.e. extreme weather and/or raccoons.  My handyman noticed it when he put up heating cables there and on the roof. I hired a professional eavestrough company (I checked with three of them) last year to fix it. The eavesgtrough needed re-aligning. So far it seems to be helping, but I keep an eye on my basement floors and heavy towels on the floors under two windows are a permanent part of the decor. Today, with heavy rains and winds from the east I am doing regular checks of my basement and there better not be any water get in.

One thing all this weather damage does to you. If you’ve lived through it, you become wary and worried, sometimes to the point of paranoia.

Another reason to help your family, friends and neighbours when extreme weather hits. They say misery loves company. But so does picking up after all the misery. It is being pro-active together, much better than burying your face in whatever. Much better than doing something to relax. You need to take action and sometimes the adrenalin from the worry and the bad surprise can act as a catalyst for strength to try to fix the situation.

Just think if a group of neighbours, friends, etc. all work together towards this.

Fix the current disaster, then move on to climate change action. Do it in steps from the beginning.

And yes, I haven’t forgotten that governments and corporations have to do their part too. Some are.

As for Nigel Applewaite, he has had flooding in the basement and garage of his home. Sometimes what goes around does actually come around if we just let it.

Only Child hit with another 2013 run off – leaky basement

Only Child gearing up to tackle government depts, companies and individuals that screw up her life

The snow melt itself over the weekend was okay. But as soon as the rain and wind started coming from the east, water got in my basement. In my usual cynical, non-trusting nature, I had towels and mats down in strategic places and they caught it. This time the water came in on the rec room floor – on the far side of the house – yet another place where it was coming in before Nigel supposedly fixed it with the big excavation in April 2011.

This isn’t the first time since then that some water has gotten in the basement. Because nothing got in through the walls between April 2011 and the end of February 2013, what Nigel did worked – for those wall cracks.

But he didn’t dig down far enough. Afterwards, from talking to others, I found out he should have dug down right to the weeping tiles, but he only went four feet down. I remember him telling me that he would be going down four feet. (Yes, I have written documentation of his job and he was supposed to go down to the weeping tiles; but all these events traumatize me so I can’t think straight especially if I don’t know what I’m supposed to think). Last year after the February leak there were four others and nothing after July 8.

Of course, last year I called Nigel in and he said something about maybe a minute crack in the weeping tile or maybe it was the drains and to get the city and a private plumber/contractor to check my drain – he doesn’t do that. A fellow from the City of Toronto Water Works Dept. (bless him) came and did the full check from my house end of the drain out to the city’s on the street.

Nigel is talking through his thick skull.

My take on this is because Nigel didn’t do his job right, the part he.did do is okay, but the part he didn’t screen etc. is where it’s coming from.

Even with help from my ex-husband paying half (he says he will) I cannot afford another excavation. I have other emergency-like things with the house to get done this spring – like a few new windows because one leaks (but this wasn’t the cause of Saturday’s problem) and another one or two or three get the condensation freezing up in cold weather.

Right now I have to look into the leaky basement situation more – get information and quotes from other professionals in this line of work; find some people in the Toronto area who have had the same type of basement leaks fixed and that it has worked for at least four years – and get their contractor’s contact info; decide if I want to leave the situation and do a wait and see; or get Nigel back and see what he says.

I may do all of the above.

All the consumer advocacy I got thrown into the latter part of 2013 has taught me a few things.

No longer do I let big business, government, contractors, etc. etc. get away with screwing up my life. It’s bad enough dealing with your own mistakes. But when it’s others’ mistakes and they encroach on you and cause you grief, anxiety, money and time, that’s when to put your foot down. And when the screw-ups caused by others are higher in number than your own mistakes, something is wrong out there.

Has anybody noticed this ratio of the number of others’ screw-ups to your own mistakes? This is a new phenomenon for me. Sure, I’ve had patches of four things going wrong at a time in the past, but I would solve them and that was that until the next patch. And they didn’t outnumber my own mistakes.

One thing is certain – this is the year I declare war on Nigel for causing me grief for not doing his job right in the first place in 2011.

And in case you are wondering, he was recommended, but by someone he knows, not by someone he did work for. He also did other jobs for me – did a beautiful job of recreating/fixing my front veranda, as well as fixing the chimney bricks. And he does this waterproofing business for other clients.

“Life” has to turn around quite a bit for me to get rid of my almost continual crankiness. That means a lot of the “outside stuff” has to be gone/fixed. Right now the good is at 25 per cent and where I am in my life based on my wants and needs is at 40 per cent and that’s pushing it. For a senior that is not a good rate.

Excuse me now while I get ready to do something in that 40 per cent –promote my mystery short story collection Beyond the Tripping Point (Blue Denim Press, Oct. 2012). I’m scheduled to guest on a TV interview show today up in Richmond Hill

All right it’s cable TV but it’s up in York Region – where some of my stories take place and where I and four other Crime Writers of Canada authors will be reading March 14 at the Aurora Public Library.

You gotta grab the few good moments in life when you can.