Only Child asks: Are Toronto buses missing their schedules? 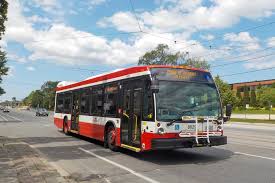 When I was a child, my mom and I would play a mild form of roulette to catch the bus. Our street was halfway between two stops so we would walk the very short half block to the main drag, look both ways, and decide which bus stop to go to. Sometimes we could actually see the bus coming and sometimes we couldn’t. But there was always the chance the bus would show up as we walked (or ran) to either stop.

Fast forward to today. Bus schedules for each route are shown on the TTC website. Any “alerts” as the TTC calls schedule interruptions or changes are posted and continually updated. Those with smart phones can get an app so they can get up-to-date bus arrival times. A few bus stops have digital information with arrival times for the next two buses. Subway station bus levels have electronic times posted that change to match the actual bus schedules.

So all should be working well – even when buses are delayed for some reason. AND WE BUS RIDERS SHOULD KNOW ALL THIS BECAUSE THE INFORMATION IS ACCURATE.

Here’s my experience… or some of it.

From where I now live I can take four different bus lines – two stop at the stop near my home and all four stop a long block away. Usually I check online before I leave to see what’s what with the schedules and any alerts including construction nonsense.

Might as well save my time and eyesight, though because…

The Woodbine bus does run to schedule – its own schedule which seems to be timed about halfway between the actual schedule posted online..

The O’Connor bus – well it will take you for a ride (or not). Even on Sundays when there is no construction in the way, the drivers (and in some cases their supervisors) can’t get it right. Last Sunday I was coming home from some grocery shopping – no problem with the subway, but when I landed at the subway station to switch to the bus, it was “fun and games”. The electronic schedule said that one O’Connor bus was now due. I can take either one to get home. So, that was good. A bus did come in right away and stop on the O’Connor side of the bus platforms. But its sign said “Coxwell 22” bus, which means it was going the other way on Coxwell Avenue. So after unloading the passengers, it drove around to the other side of the station where the Coxwell bus picks up passengers (and unloads them too). Furious, I returned to the electronic schedule on the wall. Now the O’Connor C was scheduled to arrive in 14 minutes and the O’Connor A in 18 minutes.

Guess what probably happened. The a****** supervisor probably gave the O’Connor bus driver instructions to switch to the Coxwell south route because of the bridge work there and a festival being held by the Lakeshore. Meantime the Coxwell buses were arriving okay and people got those buses. So what was the problem?

The O’Connor buses? The C was late and arrived a couple of minutes before the A. I boarded the A. Both buses took off right away from the station like a herd of elephants was after them. (Maybe that should have happened earlier). As the A bus beetled out of the station, another A bus was entering. My A bus was right behind the C bus, until the C turned down one street.

This is a regular occurrence. So is the change of drivers’ nonsense. I don’t know if the drivers themselves are arranging to switch at stops partway along the route instead of the subway stations (or wherever the end of the line is) like they should – just for their convenience, or some you-know-what supervisor in his or her “wisdom” is telling them to do so. But it is annoying to have the driver suddenly grab his bag and leave the bus – often with not telling us why – because his shift is over. Sometimes his replacement driver doesn’t arrive for some time.

I have sent in complaints to the TTC before on these shenanigans, but is anybody doing anything about it?

It would appear not.

I have a courtesy rule. When I get off a bus, I say “thank you” to the driver. But not when they are late or do the driver switcheroo mid-route – especially if it is after dark.

Too bad I can’t afford a cab or Uber.

Will I be forced to hitch-hike?

As for my late Mom – she is probably rolling around in her grave. Or her spirit is frowning. She definitely is not laughing.

Anybody have similar experiences with public transit where you live.