Only Child says “NO” to Toronto transit cuts 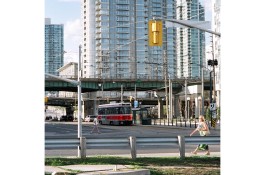 Streetcar among the condos in Toronto, Ontario, Canada

They’re taking away parts of my beloved public transit in Toronto. I feel like I’m losing some of my close friends. When I was a kid, it was an adventure to ride with Mom on  Toronto’s buses, streetcars and subways. Now, some routes are on the proverbial chopping block and some bus  services in Toronto have already had hours reduced.  It’s all in the name of cost-cutting from Mayor Rob Ford and his executive council cronies to eliminate Toronto’s $774 million budget short. Mr. Ford commissioned an outside study to find services to cut and they’ve come up with a list of possibilities to the off-key tune of $740 M. Nothing is sacred. When he gets done, Toronto will not be recognizable. I am saddened.

One of the bus lines recently cut back in hours is the Broadview 8 bus – one that I took with my Mom and Dad as a child. We lived a skip and a run (depending on where the bus was when you were trying to catch it) from a couple of bus stops. Today, I can take that bus as part of my route home from wherever or if I’m visiting friends in my old stomping ground, when the bus is actually running.

I’m someone who not only depends on the TTC to get around,  but I actually enjoy riding on a bus, streetcar and subway. The scenery is interesting and varied: outside, all those condos springing up, parks, gardens and quaint old shops along the streetcar routes in particular; inside, that lady next to me texting madly or the fellow swaying to the sound (dare I say “noise?”) emanating from those buds in his ears. There is also the nostalgia factor – not just personal, but the TTC history.  TTC stands for Toronto Transit Commission but way back before even my time, Toronto’s transit wasn’t all one big service – it was several, and some were private. Do we want to go that route (pun intended) again? That’s something else being considered.

Riding on the buses, streetcars and subway with my mom was a lot of fun. As I write in my memoir:

The bus stop closest to 139 was just around the corner on O’Connor Drive – that is if you walked left and the TTC hadn’t moved its trademark red and white sign to the far side of Don Mills Road. If we saw the bus coming, we had to decide quickly if we could reach the stop before the bus or if racing to the next stop, one and a half blocks west, was a better choice. We were playing transit roulette, with the streetlights at Don Mills and the driver’s whim to wait for us or to continue on to the next stop.

Once we boarded the bus, we continued with the rest of our travels. Long languid rides on streetcars out to Long Branch in Toronto’s west end. Short hops on buses to shop on the Danforth. Streetcars jam-packed with sugar-fuelled kids and yawning parents returning from a day at the CNE. Swallowing hard on a long bus ride to the orthodontist. Or doing the freezing changeover from subway to streetcar inside the makeshift wood shelter in the middle of Bloor St. east of Yonge St. All before the Bloor subway line opened in 1966.

(Excerpted from You Can Go Home: Deconstructing the Demons, copyright 2011 Sharon Crawford)

However, not all rides were fun back then, as I write:

When I was 10 and 11, I wore braces on my teeth. The orthodontist had an office on Eglinton Avenue just east of Yonge St. Perhaps if we had travelled by subway, the journey might have been different, but Mom insisted on taking the more direct route.

We are sitting on the Leaside bus, this time going in the opposite direction from the Danforth. As it clips across the Leaside Bridge and then diverts through the factory area on Brentcliffe, my mind and soul are elsewhere, clamped in the dentist’s chair. The dentist is tugging at my braces and picking at my teeth; my mouth is wide open and I want to retch. The bus sharp turns back onto Laird Drive. I jerk up and the contents of my stomach start to follow as far as my throat. I must look whiter than the fat in the bacon because Mom opens a window.

“It’s okay. We’re almost there. We’ll be off the bus in a few minutes.”

I swallow hard, clutch my stomach and wish I were in never never-never land. The bus halts at the stop before Yonge St. I jump off, with Mom right behind me. She steers me towards an alley by one of the buildings and I lurch forward, open my mouth and pour out breakfast, lunch and snack. Mom hands me a tissue, and while I wipe my mouth and sniffle back vomit, she murmurs calming words.

(Excerpted from You Can Go Home: Deconstructing the Demons, copyright 2011 Sharon Crawford)

And that about describes how I feel about these proposed service cuts. I’m even feeling sicker about the proposed cuts to the public libraries but that’s fodder for another post or we’ll be here till Christmas 2012 (not a typo).

If you want to read more about the proposed cuts to Toronto’s service, go to http://www.cbc.ca/news/canada/toronto/story/2011/07/21/toronto-service-cuts-report326.html. I’d prefer to have a bit more of a hike in our property taxes than the 3 per cent we’re getting next year and a TTC fare increase. We received no property tax increase or TTC fare hike for this year and one revenue resource – the vehicle registration tax – was given the boot. Duh. Note to Mayor Ford and cronies…potential revenue down the drain.